Growing up in USA near Missoula, Montana, she moved to Vancouver after completing a BA in Biocultural Anthropology at Western Washington University in Bellingham, Washington. With this degree she has studied human anatomy, biology, evolution and comparative human culture.

In 2015 Brandy completed her 3-year tattoo apprenticeship offered by Bryan Glatiotis, owner and showcase artist of Dark Day Studios. As apart of the training, she also completed a blood borne pathogens for body art safety course offered by OSHA (USA) to further assure she is tattooing in the utmost sterile and safe environment.  During her stay in Vancouver she also worked as a monument designer for a gravestone company, and prepared graphic designs for various music projects. These acquired designing skills have translated well to her approach in tattooing.

Being predisposed from a young age towards the physical arts, she has pursued many forms of visual art (drawing, sculpture, photography, graphic art, tombstone design) and music.  As a professional musician (Big John Bates, Momy Fortuna), she has toured Europe, North America and Japan over the past ten years.  In these travels she has been versed in the comparative cultural arts from western European to traditional Japanese as well as gaining experience tattooing in Northern Europe. 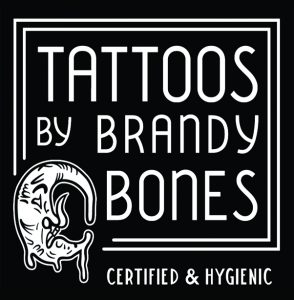